It has been a long and arduous couple weeks for me, so I apologize for the delay in the continuation of this series.  I hope to get the rest of the positions finished before the regular season starts.  Let’s get started with the guys that MLB Network deem to be the top 10 at first base:

I have to say that the talent at first base seems to have diminished from where it was 5-10 years ago.  If you’d made this list back then, many of the same names would have appeared – only they would have been much closer to their prime.  And, you look at the younger guys, and there just doesn’t seem to be a lot of great first base prospects coming up.  Eric Hosmer in KC had a dismal year in 2012.  Anthony Rizzo in Chicago has a lot of potential, but has a long way to go still.  Jonathan Singleton is the top 1B prospect in all of baseball (Houston), but is the only firstbaseman to crack the top-100 prospect list.  I may be missing something, but the part of the diamond that used to be absolutely loaded with talent, now seems to be either aging rapidly, or unproven on most teams.

That being said, there are still some very good players manning first base.  And, my honorable mentions go to Paul Goldschmidt & Paul Konerko.  Konerko is finally showing signs of aging, and looks to be in the twilight of his career.  He’s still productive, but if you look at the dropoff from 2010 to 2012, you’ll see a guy who probably only has a couple more seasons left in him.  And, Goldschmidt is a combination of young and inexperienced, even though he had a nice season in 2012 (20 HR, 82 RBI, .850 OPS).  Last year was his first full year in the big leagues, and he’s also just 25.  Others have a bit of an edge on him in experience and production.  So, here’s how I would rank the top 10: 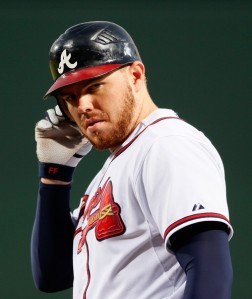 10. Freddie Freeman (ATL) – I had to go with the guy on his way up, rather than on his way down.  Konerko & Freeman had similar seasons in 2012, but Konerko turns 37 today, while Freeman is just 23. His OPS has hung around .800 his first two full seasons, his strikeout totals are going down, and his power numbers are going up.  And, hopefully, his below-average fielding skills will improve with experience.  In 2-3 years, we might be seeing Freeman, Goldschmidt & Craig battling it out for #1 on this list.

9. Allen Craig – as with many of the young/inexperienced guys we’ve seen on these lists, when MLBN ranks them highly, my response is “not so fast, my friend.”  Craig has less than 900 PA’s spread over the last three seasons (even though he’s already 28, and turns 29 in July).  And, while he has performed well (.863 OPS, 37 HR, 150 RBI, 135 wRC+) in that time, he’s still going to have to make some adjustments in 2013 – what looks to be his first full season at first in the big leagues.  If he can make them, then he could climb into the top 5 on this list a year from now. He’s a slightly below-average fielder, and if he was a little younger I would expect that to improve.  But, at his age, I’m not sure that’s going to change much.

8. Ryan Howard (PHI) – have we just completely dismissed this guy?  Do we no longer like him just because he isn’t hitting 45-50 homeruns anymore?  Injuries cut short his 2012 season, so we won’t count his cumulative numbers from that season.  But, even though he declined from the monstrous power numbers he had from ’06-’09, he hasn’t deflated completely.  In 2010 & 2011 he averaged 32 home runs, with an OPS of .847, and a wRC+ of 126.  He’s entering his age 33 season, and has been absolutely raking in Spring Training (as early as it is).  Yes, he’s one of the worst fielding first basemen in the game.  But, he still deserves a spot on this list, considering the other options out there.

7. Mike Napoli – consider this: his average season the last 3 years has been 27 HR, 66 RBI, .875 OPS, and 134 wRC+.  Only somewhat impressive until you take into consideration the fact that he also has only averaged 120 games.  Playing 1B instead of catching, at the age of 31 means we likely will see even more production the next couple years from Napoli.  He has played very little in the field at first, but hey, if Ryan Howard can do it, then….

6. Edwin Encarnacion – He has more experience at 1B than I expected (93 games the last two seasons), and it appears this is where Toronto needs to use him.  His RF numbers are good at first, and he had a .995 fielding pct. there in almost 70 games last year.  I’m actually less concerned about his ability to field first, than I am his ability to repeat his offensive outburst from 2012.  Prior to last season, his best year was a 26-homerun campaign with an .807 OPS in 2008.  Granted, last year was his first injury-free year to spend the entire season at the big-league level.  But, do we really think Encarnacion is a 40+ homerun guy?  I think he’s better than the 15-18 homeruns he had hit in many years before that, but I don’t think we’ll see 42 again.  But, if he hits 30-35, and drives in 100 with a .900+ OPS, then Toronto has figured something out that Cincinnati never could.

5. Mark Teixeira – Yankees fans would really like to know why it takes “Tex” so long to get his rhythm.  As good as his numbers have been the last few years, it seems like it’s mid-May every year before Teixeira really starts playing.  He also is no spring chicken – turning 33 in April.  But, he’s still going to give you around 30 home runs, an OPS around .830, his wRC+ the last three seasons is a nice 123, and he’s probably second only to Adrian Gonzalez as a fielder at first. 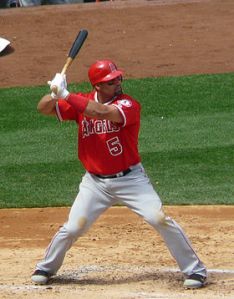 4. Albert Pujols – I only give Pujols the slightest of edge over Teixeira.  He’s not as good in the field as Teixeira, but his bat is better, and he’s better on the base paths.   But, I’ve been preaching this for over a year now: watch as Pujols’ numbers continue to decline.  His OPS since his MVP season in ’09: 1.101, 1.011, .906, .859.  His homerun totals: 47, 42, 37, 30.  His intentional walks have been cut in half the last couple years, compared to what they were when he was in his prime.  Pitchers aren’t afraid to pitch to him anymore, and at 33 years old it isn’t like he’s going to get better.  And, he has yet to see a real at-bat in Spring Training, because of his knee surgery in October.  This, after a season in which it took him about 2 months at the beginning of the season to actually start swinging the bat well.  If it wasn’t for the limited talent at 1B, I probably would have Pujols even lower.

3. Prince Fielder – who has led the league (two different leagues, nonetheless) in intentional walks the last two seasons?  Who has been the force batting behind the eventual MVP of the league each of the last two seasons?  Who is second only to Joey Votto in wRC+ over the last three seasons?  And, guess who doesn’t even turn 29 until May….  In spite of his last name, it’s Prince’s bat that is the scariest part of his game.  If he were even average in the field, he would be the clear #2 on this list, but I have to drop him a spot because of his poor fielding ability.  But, before you even look at his .930 OPS, or 30+ homerun average the last three years, I love the often overlooked stats that tell you so much about what pitchers think of him.  Like the IBB’s.  Like the fact that the guy in front of him in the lineup was walked over 40 fewer times once Fielder was acquired (and Braun’s IBB’s went from 2 with Fielder behind him to 15 the next year!). 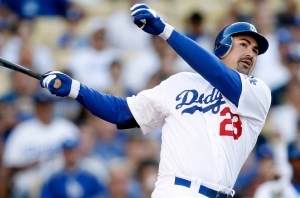 2. Adrian Gonzalez – there’s a reason the Red Sox gave him a boatload of money just 2 years ago.  Take away a dismal year in Boston, in which he had no help in that lineup, and look at what you have.  A guy still in his prime (though, in the tail end at 31), who can hit 30+ home runs, drive in 100+, with an OPS well over .900, and who is arguably the best fielder at his position.  Nothing wrong with that.

1. Joey Votto – probably the only no-brainer on this list.  The guy has had an incredible .998 OPS over the last three seasons, slugging 27 home runs per year (though that average would have been well over 30, had he played a full season last year).  And, as impressive as that is, I may be more impressed with his 167 wRC+.  He’s helping his team produce runs at a rate 67% higher than the league average! No one else on this list passed 150.  Add to all that impressive offense the fact that he’s a Gold Glover at first, and is just 29 years old, and the gap between him and the rest of the field just keeps getting bigger.