Second base is a little trickier position to evaluate than some of the others have been.  You have premier batters that are able to fill the top 10 (or more) at all of the previous positions we’ve covered.  But, that’s not going to be the case at second.  Yes, there are a few guys on this list that can bat in the middle of the lineup.  But, for the most part, you’re looking for a guy that can field the position well, and provide enough offense to not be a liability.  He might bat in the top couple spots if he’s able to get on base.  Or, he might bat somewhere around 7th or 8th, depending on the strength of your lineup.  A slugger who can’t field the position well (a la Jeff Kent), in my opinion, isn’t nearly as valuable at 2B as he might be at 1B or in LF.  So, let’s take a look at how MLB Network ranked them this year:

I have some fairly major changes to this list, so let’s get started.  My honorable mentions go to: Chase Utley and Neil Walker.  How MLBN can rank Utley where they do is beyond me.  He has had 3 consecutive injury-prone seasons.  He has played in 301 games in three years.  I guess you could say if he’s healthy, he’s one of the best. And, one injury-shortened season, I’m willing to dismiss.  But, three in a row?  I’m not ready to put Utley on this list until he demonstrates that his career isn’t on a downward spiral at the age of 34.   The main reason Walker didn’t make the cut was his defense.  It’s below average, and his offense isn’t really great enough to overcome it (13 HR, 6 SB average the last 3 seasons).  Now, let’s take a look at how I would rank them.

10. Jason Kipnis – he’ll be just 26 years old at the start of the season.  And, already, he has shown some impressive potential – stealing over 30 bases last season, while also hitting 14 home runs.  He definitely has 20/20 potential, if not 30/30.  And, he’s also an average fielder, which could get even better with age and experience.

9. Danny Espinosa – with a couple years under his belt, I really like this guy.  He has an excellent glove at second, and has averaged almost a 20/20 season his first two years at the big league level.  He’ll turn 26 in April, and in a couple years could be at or near the top of this list.

Now, the two years prior to 2012 are the reason he’s this far down the list.  He had some issues with nagging little injuries and inconsistency.  But, last year was his first full season since 2009 (when, incidentally, he hit 36 home runs and drove in 108).  He’ll turn 31 before the season starts, but he looks ready to do some damage in Arizona. 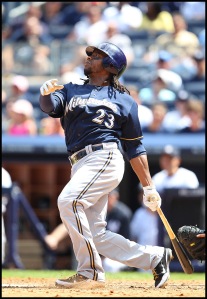 6. Rickie Weeks – how MLBN could include Uggla, but not Weeks makes no sense to me.  They’re easily two of the worst fielding second basemen in the game right now.  But, overall, Weeks’ offensive production has been slightly better than Uggla’s (117 wRC+, compared to 116 since 2010), and he contributes with both his bat (averaging 23 HR the last 3 years) and his speed (12 stolen bases average).  Plus, Weeks is just 30 years old.

5. Howie Kendrick – Howie gets the nod here for me, because of what I mentioned previously: fielding is much more important at this position than at others.  Kendrick is an above average fielder at second, as well as an above average bat.  He has a 107 wRC+ the last three years, and has shown the ability to hit home runs and steal bases (averaging 12 & 14 of each, respectively, the last 3 years).  Kendrick is also just 29 years old, so he has a few prime years left in the tank.

4. Brandon Phillips – It seems like he should be older than just 31, but Phillips doesn’t turn 32 until June.  And, once you get past Pedroia, I think you’d have to say Phillips is the next best fielding second baseman (3 Gold Gloves in 5 years, and arguably should have had 4 in a row leading up to 2012).  He has hit exactly 18 home runs each of the last three seasons, and he has averaged 15 stolen bases.

3. Ian Kinsler – Texas’ version of Pedroia, he does a lot of things well.  He’s excellent in the field, he’s excellent on the basepaths, and he can swing the bat.  He has averaged a 20/20 season the last three years, and put together a 30/30 season in 2011.  He turns 31 in June, so we may see him slow down a little in the next couple years.  But, right now, he’s one of the best.

2. Dustin Pedroia – he’s still arguably the best fielding second baseman in the game.  But, his offense has tailed off a little over the last few years.  Not that he’s in bad shape.  Second only to Cano in wRC+ (124), OBP (.368), and SLG (.469).  He’s a 20/20 guy that plays a fantastic second base, and is just entering his age 29 season.  With a revamped Boston lineup and clubhouse, he might have another MVP-calibur season.

1. Robinson Cano – he has definitely separated himself from Pedroia on this list.  His 142 wRC+ the last three years is nearly 20 points higher than anyone else at the position.  He’s hitting home runs, he’s getting on base (a .370 OBP – the best at this position), and he’s a very good fielder (top-5 for sure).  The only negative you might could find, is that he’s older than you think – 30.  Now, if he ends up having the stamina of Jeter, then who cares.  But, if he’s normal, then we can expect to see his numbers start to decline a little over the next few seasons.