Much like second base, the shortstop position puts a premium on defense, rather than offense.  However, it does seem that there are more offensively capable players at short.  What I find interesting is that, in spite of the defensive priority, MLB Network put a lot of guys high on their list that are talented offensively, but have questionable defense.  Take a look at their rankings:

I understand that it’s rare to find a quality combination of offensive production and defensive prowess.  But, it appears to me that MLBN put a higher value on offense than defense, which I’m not convinced should be the case at this position.  Maybe I’m just wishing for the “good ol’ days” when the SS position was loaded with talented defenders like when it was Ripken, Vizquel, Jeter, A-Rod, Tejada, and Renteria.  All of those guys seemed to take their defense seriously, and they were – at worst – acceptable offensive players (even Vizquel, who was no offensive juggernaut, was stealing 30+ bases every year in his prime, with an OBP of .360).  But, I digress…

With those thoughts in mind, my list is going to look a good bit different from MLBN’s.  Let’s start with honorable mention: Derek Jeter & Hanley Ramirez.  Jeter is going to be 39 in June.  And, while he did have a bit of an uptick in offensive production in 2012, I don’t think we can expect that to continue at his age.  His 2010-11 numbers are probably more what we should expect – 10-12 home runs, 15 stolen bases, and an OPS around .730 or so.  And, while he doesn’t commit very many errors, his defensive metrics tell the real story – he’s a significant liability at shortstop these days.  Ramirez has seen a continual decline in offense over the last three seasons, and that trend scares me.  He played well in LA, so there’s hope that he can turn it around (he is just 29, after all).  But, his defense is also poor, so I can’t see him making this list.  Now for my top 10:

10. Elvis Andrus – he’s just 24 years old, but he has made significant strides in his defense.  He’s gone from a young, mistake-prone defender to a guy that is slightly above-average with his glove.  And, his offense is improving as well, up to a .727 OPS last season.  But, his offense will need to make more significant strides in order for him to move up this list.  A 93 wRC+ the last two years isn’t especially exciting.  But, he’s definitely on the upswing.

7. Starlin Castro – he’s young.  He’ll just be 23 when the season starts, so the hope is that his defense will improve with experience (25+ errors each of his first three years in the bigs).  He has already proven to be an offensive asset on a team with very little else in their lineup.  An OPS of .761 in his first three seasons at the big-league level, and he continues to improve his power numbers, leading many to believe he has 20/20 potential, at least (12 HR, 24 SB average the last 2 years, along with a wRC+ of 104).  But, his defense is below average, and that will have to improve for him to move ahead of others on this list.

6. Ian Desmond – he’s not a great defender, though his glove skills do continue to improve (.970 fld. pct. last season).  And, at just 27, he’s entering his prime, which really showed last year offensively – 25 HR, 21 SB, .845 OPS.  If he can improve his defense a little, and continue to play that well offensively, he will jump even higher on this list a year from now.

5. Erick Aybar – an above-average defender (Gold Glove in 2011), and his offensive production continues to improve.  At just 29 years old, he is now an above-average offensive player (106 wRC+ over the last two seasons), who can hit double-digit home runs as well as steal 20-30 bases.  With no glaring weaknesses on either side of the ball, Aybar is closer to the great shortstops of old than many on this list. 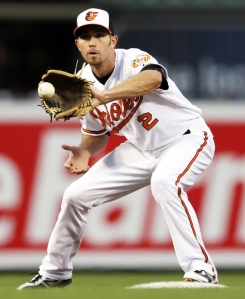 4. J.J. Hardy – easily the best defensive player on the list, which is why it shocks me MLBN has him ranked so low.  I understand his offensive production is slightly below-average compared to the rest of the league (94 wRC+ the last 3 years), but at shortstop there aren’t many high-end offensive players.  And, Hardy is going to hit around 20 home runs, and has had an OPS of .726 over the last three years – which is hardly an offensive liability.  But, it’s his Gold Glove defense that should push him much closer to the top than MLBN had him.

3. Asdrubal Cabrera – not great defensively, but not nearly the liability that some of the others on this list are.  Plus, he’s on the upswing of his career (27 years old), and has 20/20 potential offensively.  His run production the last two seasons (116 wRC+) is only behind Reyes & Tulowitzki.  A little more work on his defense, and he could be moving even further up this list in years to come.

2. Jose Reyes – he’s below-average defensively, but his offense is so far ahead of the rest of the field that there was just no reason to drop him down any.  He’s the only guy on here, besides Tulo, with an OPS of .800 or better over the last three years.  He’s going to steal 30-40 bases (if not 50-60), and in spite of only hitting around 10 home runs each year, his SLG is .450 the last 3 years because he’s gonna give you 40-50 doubles and triples.  And, for a guy that has averaged 635 PA’s the last three years, I’m impressed that he has also averaged just 53 K’s per season.

1. Troy Tulowitzki – he might be the only SS in the game right now that comes close to the types of players we saw at this position a decade or two ago.  He’s extremely talented offensively (.919 OPS the last three seasons, and averages around 30 HR and 90+ RBI when he’s healthy, and will even steal around 10 bases), and he’s a top 5 talent defensively.  There’s a reason he has finished in the top 5 in MVP voting on two different occasions.  And, in spite of having some injury issues here and there over the years, he’s only 28 years old.  So, there’s a good chance he’ll stay at the top of this list for a few more years.