There was a lot of great pitching in the NL this season.  And, if you have any doubts about that, just go take a look at the stats of guys like Jordan Zimmerman, Mat Latos, Hyun-jin Ryu and Julio Teheran.  None of those guys cracked my top-5, but they all had very good seasons on the mound.  So, without further ado, here are my top 5, culminating in this year’s winner. 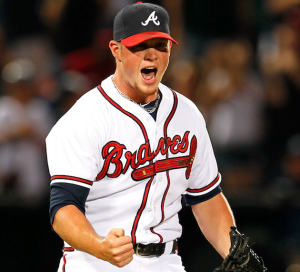 #5 – Craig Kimbrel (ATL).  It’s not every year that you see someone rack up 50 saves.  It’s only been done 13 other times in history, and Kimbrel became the youngest reliever ever to achieve that mark this year.  The rest of his numbers aren’t quite as staggering as they were a year ago, when he finished 5th in Cy Young voting.  But, they’re still good enough to make my list: 1.21 ERA, 0.88 WHIP, and a 4.90 K/BB ratio.