The Kansas City Royals franchise began play in the American League in 1969, as an expansion franchise.  What’s interesting about their start is that it was just two years earlier that professional baseball left Kansas City – when the Athletics moved to Oakland after the 1967 season.  After this unsettling move occurred, renowned Missouri senator Stuart Symington demanded that a new professional team be planted in Kansas City.  In fact, Symington went so far as to threaten Major League Baseball with legislation that could threaten their antitrust exemption, and the now-defunct “reserve clause.”  Originally, MLB acquiesced and gave the city an expansion team that would begin play in 1971.  But, Symington wasn’t satisfied – stating that the city shouldn’t have to wait.  After more threats against the league by Symington, they finally agreed to allow two expansion teams (Kansas City and Seattle) to begin play in 1969.

The nickname “Royals” is tied to a couple different things in Kansas City.  First of all, the “American Royal” livestock show and rodeo has been held in Kansas City since 1899.  Secondly, with the exception of the Athletics (who moved to Kansas City with a nickname already in tact), the city’s professional teams have a history of being given names related to rulers – Kansas City Chiefs (NFL), Kansas City Monarchs (Negro League Baseball), Kansas City Kings (NBA).

The franchise was almost immediately successful.  It only took them 3 seasons to have their first winning season, and in 1976 they reached the playoffs for the first time.  Over the next 10 years, the Royals would reach the playoffs 7 times, achieve 2 American League championships (’80 & ’85), and win their first World Series championship in 1985.  But, from that point forward, they have fallen on hard times.  Since that World Series win, they have yet to reach the playoffs a single time.  In fact, they have finished in last or next-to-last place 16 times over the last 28 seasons, and have only managed a winning season 7 times.  Due to their relatively short existence (and poorly constructed teams for half of it), they have only retired 2 players’ jerseys, and they only have 1 player in the Hall of Fame.  But, without further ado, here are the top 5 in franchise history: 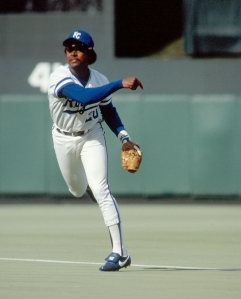 3. Dan Quisenberry (’79-’88) – when it comes to recognition among all-time greats, I think the great relief pitchers in history don’t get enough credit.  Perhaps it’s because there has been such a wide variety of relievers who will have a couple great years, and then a bunch of mediocre ones.  Or, maybe it’s because a guy could save just 25 games for 15 years and accumulate nearly 400 saves.  But, the guys who have sustained legitimate success deserve more recognition.  Quisenberry is one of those.  When he retired in 1990, he had the 6th most saves in baseball history (284).  He still holds the record for most seasons leading the league in saves (5), and consecutive seasons leading the league in saves (4).  From ’82-’85, his average season was a 2.38 ERA, 40 saves, a 1.05 WHIP, and 3.71 K/BB ratio.  He appeared in 3 All-Star games in that time.  He also finished in the top 3 in Cy Young voting every one of those years, including runner-up finishes in ’83 & ’84 – and, to be honest, he should have won the ’83 Cy Young.  His career ERA+ of 146 is the 8th best in history among qualified pitchers, and his Cy Young share for his career ranks 32nd all-time (well ahead of Hall of Famer Bruce Sutter, whose career was remarkably similar to Quisenberry’s, yet Quisenberry dropped off the ballot in ’96 after failing to appear on 5% of the ballots).  He’s at the top of the Royal’s All-Time ERA list (2.55), he ranks 2nd in WHIP (1.15), 2nd in saves (238), and 5th in K/BB ratio (2.31).