The Athletics franchise was one of the charter American League franchises in 1901.  They were founded in Philadelphia by Connie Mack, who was the owner and manager of the team for its first 50 years of existence.  They enjoyed reasonable success in Philadelphia for the first 30 years, but after two decades of decline, the team was moved to Kansas City in 1955.  Unfortunately, the new owner of the Athletics, Arnold Johnson, was more interested in making a profit than in fielding a quality team.  Under Johnson, there were also a number of extremely lopsided trades with the Yankees (whom he had a working relationship with prior to purchasing the A’s), where he would send young, talented players (most notably, Roger Maris), in exchange for aging veterans and cash.  Many accused Johnson of essentially functioning as a farm system at the major league level for the Yankees.  But, in 1960, Johnson suddenly died of a brain hemorrhage, and the majority ownership was purchased by Charles O. Finley.

Finley immediately began work on the public image of the Athletics – including purchasing an old bus, pointing it toward New York, and setting it on fire, symbolizing the end of their “special relationship” with the Yankees.  But, in spite of his antics, and his claims that he wanted to keep the team in Kansas City, he almost immediately began looking for a new home for the A’s.  In 1962, he had serious discussions to move the team to the Dallas area, though no formal proposal was ever set before the owners.  In 1964, Finley signed an agreement to move the team to Louisville, but was blocked by a 9-1 vote by the rest of the owners of the AL.  Six weeks later, he proposed a move to Oakland, but was again shot down.  In October of 1967, he was finally given permission to move the team to Oakland for the 1968 season.  During their 13 years in Kansas City, the Athletics endured some terrible seasons – never finishing with a winning record, and a combined 829-1224 record for an abysmal .404 win percentage.

If I were to ask you who the top three teams in the history of baseball were, in regards to World Series titles, I imagine most would guess the top 2 – Yankees & Cardinals.  But, I wonder how many would guess that third on that list isn’t the Dodgers, or the Giants, or the Red Sox – but the Athletics, who have 9 World Series titles in franchise history.  In Philadelphia, they appeared in 5 World Series from 1905-1914 (just 1 losing season that entire time), and won 3 titles (’10, ’11 & ’13).  They rose to the top of the AL again, winning 3 straight pennants from ’29-’31, and won the ’29 & ’30 World Series’.  After moving to Oakland, they made 5 straight playoff appearances from ’71-’75, and won 3 straight championships from ’72-’74.  They again won 3 consecutive AL pennants from ’88-’90, winning the World Series title in ’89.  Since 2000, they’ve made 7 playoff appearances, but have only once advanced beyond the ALDS – losing the ALCS in ’06.  Even with the amount of success they have had in Oakland, they continue to be largely unnoticed, even by their own fans – consistently finishing in the bottom 1/3 of the league in attendance.  This has prompted lengthy discussions over the last few years of a potential move to San Jose (the most recent of numerous discussions of moving the team, dating back to the ’70’s).

Their success over the years has prompted them to retire 5 players’ jersey numbers (all in Oakland).  They have fielded 12 different MVP winners, 5 different Cy Young winners, and 8 Rookie of the Year winners.  Five players in the Baseball Hall of Fame spent their primary careers in Oakland, and 8 HOFers spent their primary careers with the franchise while it was in Philadelphia.  So, in spite of their relative anonymity, this is a team that has a long and storied history.  Choosing the top 5 here was not a simple task, and you might be a little surprised at some names that are absent. 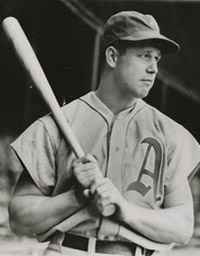