The Blue Jays were an expansion team in 1977, and were the fastest American League expansion team to win a championship – winning the world series in their 16th season (1992).  They also had their first winning season in just their 7th year, and won their first division title in their 9th year – in which they lost a heart-breaking 7-game ALCS to the Royals, after being up 3 games to 1.  They would go on to win division titles again in ’89, ’91, ’92 & ’93.  In fact, from ’83-’93, they never had a losing record.  But, since that time, the Blue Jays have fallen on hard times.  They have only once finished above 3rd place in the division (despite 9 winning seasons), and haven’t made the playoffs in the 21 seasons since their championship in ’93 – which is the longest active streak in baseball.

Despite their lack of success of late, the Blue Jays have had their fair share of award winners – one MVP, 4 Cy Young awards (including three consecutive from ’96-’98), and 2 Rookies of the Year.  There is one Hall of Fame member wearing a Blue Jays cap on his plaque – and, he will likely continue to be the only one for the foreseeable future.  Since the franchise has only existed during the period since free agency began in 1975, it will be difficult to find players who spent a great deal of time in Toronto.  But, here are my top 5, all-time:

Honorable Mention:  Joe Carter – if for no other reason, just for hitting that home run to win the World Series in ’93.  Carter doesn’t rank very high on many offensive stat lists, because he was on the downslope of his career while with the Blue Jays.  But, that home run will forever be a part of baseball lore in Toronto. 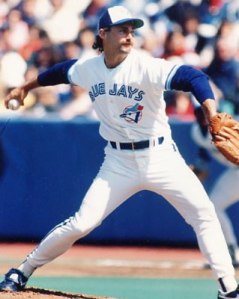