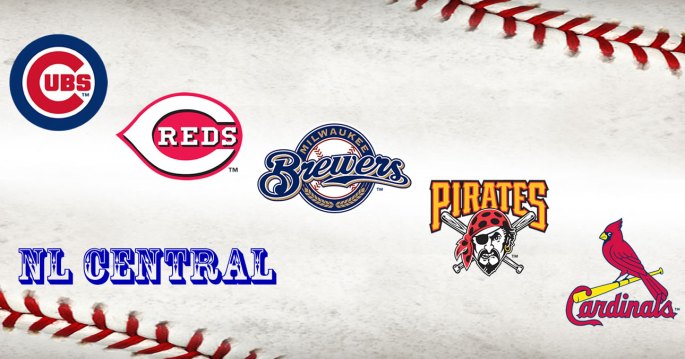 This is easily the most competitive division in the National League.  I’m not quite ready to say it’s the best division in the NL, but it might very well be.  If Milwaukee hadn’t collapsed at the end of last season, we might have seen three playoff teams from this division in consecutive years.  And, the Reds would have been much more competitive if they hadn’t had their lineup decimated by injuries.  The Cubs . . . well, they were the Cubs.  But, they have high hopes for this coming season.  Here’s how I see the division playing out this year:

For those of you who know me well enough to know who my favorite team is, let me say this:  I really did use the numbers to develop this analysis.  In fact, I made a couple minor adjustments to move my team down a spot, just because the first result didn’t make any sense at all to me.  Okay, so now that I feel like I have kept most people from calling me a “homer,” let’s take a look at why each team landed where they did…

The Pirates are an impressive team.  They have the best offense in the division, without a doubt.  Marte and Harrison are excellent bats – and, will only get better as they approach their prime years (26 & 27 years old, respectively).  The addition of Cervelli behind the plate will make for a nice replacement for Martin, who signed with Toronto.  A full season of Gregory Polanco at age 23 will be exciting to see.  And, we haven’t even mentioned the perennial MVP candidate, McCutcheon (who’s only 28 years old!).  Their bullpen is excellent, with 3 relievers with WHIPs below 1.10 (Melancon’s was 0.87 last year!).  Their defense is also very good – but, will probably only be 3rd best in this division.  The starting rotation is a bit of a concern.  But, Cole, Worley and Locke are all very young (24, 27 & 27) and look to be coming into their own.  And, they brought back Burnett, who was a nice veteran presence and influence on the young pitching staff his last stint in Pitt.

Until I did my own analysis of the stats, I expected the Cubs to be contenders in 2016 – not 2015.  But, when you look carefully at how they stack up in this division, it’s pretty impressive.  The additions of Lester and Hammel will give them the best rotation in the division, top to bottom.  Lester, Arrieta, and the fairly unknown Kyle Hendricks all had an ERA+ over 150 last year.  The addition of Motte also helps bolster what is now the best bullpen in the division as well.  Four excellent relievers in Motte, Rondon, Strop, and Ramirez (all with WHIPs under 1.10 and K/9 rates of 9.5 or higher) are going to make it difficult to score on the Cubs in late innings.  The offense is the biggest unknown.  If everything remains about the same, they will rank in the middle of the pack in this division.  But, Rizzo, Castro and Soler haven’t even reached their prime years yet.  And, who knows what eventual starting 3B Kris Bryant will bring to Wrigley.  And, Fowler will be a great addition in CF.  The team defense and speed will be better, but still near the bottom of the division.

It’s no surprise that the Cardinals remained mostly under the radar this offseason.  That has been their M.O. for several years.  The trade for Jason Hayward surprised me, because while it fills a need in RF after the tragic loss of Oscar Taveras, they only get Hayward for 1 year, while giving up 4 years of Shelby Miller, who has the potential to be a top-of-the-rotation starting pitcher.  But, I’ve been proven wrong more than once by this organization.  And, even with the loss of Miller, they do still possess the second best starting rotation in the division, thanks to Wainwright, Lynn and Wacha.  However, Wainwright is no spring chicken anymore (33), and the back end of their rotation is highly questionable (Lackey’s another year older, and whoever their #5 starter ends up being, will be unproven).  A rotation with question marks could be overcome by a stellar bullpen (see 2014 Orioles).  But, the Cardinals bullpen is only middle-of-the-pack in this division.  Granted they are very young, but they’re also very unproven – several of their best relievers had a WHIP over 1.40 last year.  The offense is also rather mediocre.  Aging Holliday and Peralta are two of the best weapons available, and Hayward is best known for his defense – not his offensive prowess.  They do have the best team defense and speed combination in the division, which will help them be competitive.  But, this division is significantly better than it was a year ago, so I think they will take a slight step backwards.

Were it not for the Red Sox & Braves collapses of 2011 (the worst I can remember), I think more attention may have been paid to how badly the Brewers finished last season.  On August 25th, the Brewers were 73-58 – 1st place in the division with a 2 game lead on St. Louis, and a 6 game lead on Pittsburgh.  They only won 9 games in their next 31, finishing 82-80 – well out of the playoff picture.  How Roenicke kept his job, I’ll never quite figure out.  And, management in Milwaukee hasn’t done anything significant this offseason to improve the team either.  If anything, they’re slipping further away from being a winning team.  With other teams getting better, Milwaukee is getting older, and less talented.  Their rotation is the worst in the division, with the only bright spots being the potential of Fiers and Peralta who are young, and already above-average pitchers.  Also, once you get past Broxton, the Brewers’ bullpen is uninspiring.  There has been talk of re-signing Francisco Rodriguez, or trading for Papelbon.  But, even that would only bring them to mediocre level.  The offense is the lone bright spot for Brewers fans.  They’re second only to Pittsburgh in this division.  Braun, Lucroy and Gomez are an excellent middle of the order.  But, that’s not enough to overcome the rest of this competitive division.

Cueto is stellar, and might very well have been the best pitcher in the division last year.  Chapman is a lights-out closer, who is just now coming into his prime years (turns 27 later this month).  But, once you get past these two well-known commodities, the pitching staff in Cincy is sub-par.  They’re counting on Leake, Cingrani and Axelrod to make significant strides, since they traded away the only two starters outside of Cueto that finished 2014 with an above-average ERA.  And, Bailey has only had 2 completely healthy seasons out of the last six.  The bullpen is also lack-luster, with two of their best relievers sporting WHIPs in excess of 1.50 last year.  And, it’s not like they have the offensive fire-power to cover up some of their lack of pitching, like Milwaukee does.  If everyone is healthy, Votto, Bruce, Mesoraco and Frazier are formidable.  But, not frightening.  They will be one of the best defensive teams in their division.  But, they are lacking in so many other areas that they will fall well behind the other teams in this division.