I heard a national sports radio show yesterday discussing the potential Royals championship, and was at first intrigued . . . but, quickly disgusted by what I heard.  I started thinking more seriously about all that was said.  Why it was said.  How it was said.  And, I began to think that this might actually be a prevalent thought among sports fans.  Especially since I’ve heard it said about champions in other sports. Here’s the phrase that was used more than once:

“They might win the championship, but that doesn’t mean they’re the best team.”

I certainly understand that this happens at times in sports.  Certain matchups create issues for the best teams, and they falter.  Top to bottom, the Kentucky basketball team last year was obviously the best team in the nation.  They just ran into a team that created problems for them, and could actually play good defense.  I remember people saying this about the New York Giants who won the Super Bowl the year the Patriots went 18-0 leading up to the Super Bowl.  I remember people complaining about how boring the Detroit Pistons were when they won it all in 2004, because they “just” played defense, and there weren’t any real stars on the team.

So, yes, it is possible for the “best” team to falter, and someone else win the championship.  But, let me go on record and say:

IF THE ROYALS WIN IT ALL, YOU CAN’T SAY THEY AREN’T THE BEST TEAM IN BASEBALL!!

As I listened more carefully to what was being said on the radio yesterday, I realized two things.  First of all, I realized that the guys on the show obviously know very little about baseball.  This is certainly an important factor in understanding why they were making such ridiculous claims.  Second, I came to the conclusion that these sportscasters (and potentially a number of fans out there, if their opinion is similar) are only considering one or two factors in determining who the “best” team in baseball actually is.  Allow me a few moments to explain why a Royals championship would be neither a fluke, nor a disappointment in the world of baseball.

I almost blew my drink out of my mouth when I heard one of the announcers declare that “obviously” the Cardinals were the best team in baseball this year because they won 100 games.  Seriously?  First of all, number of wins in the regular season is virtually irrelevant when it comes to determining who the best team actually is.  Especially when trying to compare teams across leagues and divisions.  Some divisions are more difficult than others, the schedule isn’t perfectly balanced, the AL has to deal with the DH, etc. etc.  So, the Cardinals got to 100 wins . . . and what exactly did that get them?  A comfortable seat on the couch after the first round of the playoffs.

Baseball playoffs are set up to prove who the better team actually is.  Other than the 1-game Wild Card round, the team that comes out on top is almost always the better team, because you have multiple opportunities to come out on top.  You have injuries that impact your team’s performance (one of the talking heads on the radio’s go-to excuse for St. Louis)?  Then you aren’t the better team this time, because the team you put on the field couldn’t win.  Better luck next year.  And, for the record, the Royals did have the best record in the AL, winning 95 games – hardly a lucky, back-door entrant into the postseason.

No, the 2015 Royals aren’t the ’27 Yankees.  They had three guys who hit 20+ home runs, and none that hit as many as 25.  And, to that, I say . . . so what???  Have we not yet realized that home run prowess is far from being the deciding factor in how great an offense is?  Did you see the Cubs this postseason?  Did you completely miss the fact that they became so home run happy with their swings after blasting through the NLDS, that they forgot the importance of putting the ball in play against the Mets?  No, the Royals don’t have the kind of power the kids in Chicago do, or the Blue Jays, or the teams in Texas.  But, how many of those offenses have made it to the World Series in consecutive years? 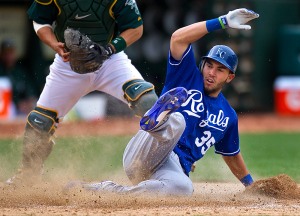 What too many seem to have forgotten since the PED-enduced power-surge of the late-90’s and early-2000’s, is that home runs are not the best way to score runs, especially in the postseason.  They might be the most exciting thing for the fans to watch.  But, relying heavily on home-run power is going to catch up with you in the playoffs.  Better pitching will dominate a home-run-based offense, because teams that hit a lot of home runs also do a lot of something else . . . they strike out.  Since 2012, the Royals have been the most difficult team to strike out in baseball.  Why?  Because they don’t care how far they hit it – they just want to hit it.  Game 2 of the World Series was a perfect example.  They saw over 40 pitches with 2 strikes against them.  They swung and missed just three times.

Instead of striking out, this team puts the ball in play.  They get on base with a lot of singles and walks, with the occasional extra-base hit.  They go first-to-third as good as any team in the game.  They steal bases (5th in all of baseball).  This is one of the best offenses in the game! 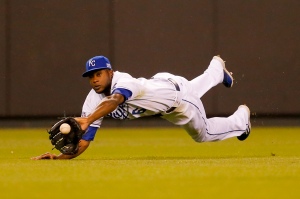 This is such an underrated part of the game.  But, did you see the statistic that came up after Hosmer let that ball go under his glove and into right field on Tuesday?  Because of his error, the Mets scored an unearned run – the first allowed by the Royals this entire postseason.  That, after allowing just 1 unearned run all of last postseason.  The Royals currently have 4 finalists for Gold Gloves this season (most in the AL).  As a team, they led all of baseball in UZR and RZR – two metrics used to determine a player’s ability to get to the ball.  They were tied for 3rd in the AL in fielding percentage – which is a feat in itself, because the more balls you can get to, the more errors you are likely to commit.  I don’t know why so few seem to pay attention to this important part of the game, but the Royals are arguably the best defense in baseball.

Even the guys on the radio were ready to admit how amazing the Royals’ bullpen is.  Except, they passed it off as if it was a crutch.  In a conversation about run differential (as if that were somehow the end-all-be-all statistic), they said something about the Royals winning games that were close, while losing games that weren’t.  And, they actually said, “Well, that’s just because their bullpen is so good.”  And, why, exactly, is that a knock against this team??  The Royals have 3 relievers who had ERA’s no higher than 2.71, with WHIPs no higher than 1.12.  Almost 140 relievers pitched enough innings this season to qualify as league leaders in any category.  Of those, 30 (21%) had the combined ERA and WHIP as good as mentioned.  Three of those pitch in KC.  Only the Pirates and Padres can make the same claim.  As a whole, this bullpen finished 2nd in baseball in ERA, 2nd in WHIP, and 1st in BAA.  No other bullpen in baseball ranks even in the top 5 in all three categories.  You’re going to have a hard time saying this isn’t the best bullpen in baseball.

You want to pick on the fact that the Royals’ starting pitchers aren’t exactly elite?  I’m fine with that.  They were bottom 1/3 of the league in ERA, BAA, and WHIP this season – though, they did jump to middle of the pack after the All-Star break (which happened to coincide with the acquisition of Cueto).  If you want to call them out for not having a great starting rotation, be my guest.  But, when you have a relentless offense that pecks away at starting pitching and runs the bases as well as anyone, an elite bullpen, and incredible defense . . . are you really going to tell me this can’t possibly be the best team in the game?